This is important because…

Motivation is a really big deal.

If you can understand yourself and what motivates you then you can make choices that enable you to live with more energy, enthusiasm and happiness, as well as generally getting better results in whatever you put your hand to.

If you can understand others’ motivation, then you can help them do the same and that’s powerful.

One way to experience high levels of motivation is to be consciously connected to the value of what we’re doing.

This is important because…

If you can’t complete that statement above in a meaningful way for what you are currently doing – both from a ‘big picture’ perspective and in the nitty-gritty of your current tasks – you are most likely feeling demotivated.

Here you should definitely stop and revisit the purpose that was there in the beginning.

Blank piece of paper. Big heading, “This is important because….”

It will make a world of difference.

The day-to-day disciplines of leadership

In this latest episode of So What About Leadership? Roisin and I discuss the less exciting but incredibly important aspects of leadership like discipline, process and systemisation. Hope you enjoy!

Just as important though is to recognise why we experience these negative feelings about what we’re not doing. This is a complex issue however one common reason is that we’re not confident in what we are doing.

This is why the art of goal setting is such an important skill.

Success is the progressive realisation of worthwhile, pretermined, personal goals.

When I’m good at setting my own goals, whatever they may be, I feel successful when I’m making progress towards achieving them. When I’m focussed on my own goals and I’m feeling good about working towards those, I’m far less likely to be worried about what others are doing and what I’m not doing.

It’s a big subject so more on this next time when we’ll look at how to set goals that actually work for you whatever you’re facing right now.

One word more than any other seems to sum up what’s really important in the leadership coversations I’m having just now.

‘Based on my current experience of the world, I’m going to assume yours is the same, or at least similar, and treat you accordingly.’

Tell me about how things are for you at the moment. How can I help? Let’s agree together on the best way to organise / manage / communicate / deliver.

Last week Roisin and I recorded another podcast discussing all things leadership in the midst of the ongoing lockdown due to Covid-19. We hope you enjoy it.

I’m writing with a fairly heavy heart today as someone who cares about leadership and really wants our leaders to do well. Everything works better when leaders lead well and now, perhaps more than ever, we need things to be done well. We certainly can’t afford to waste time, effort, money and resources in the global fight against Covid-19.

There were two situations that arose over the weekend that saddened me. The first was the announcment by (the hugely profitable) Liverpool FC that they would furlough certain non-playing staff and claim the assistance from the government for 80% of their wages.

The criticism of this has been widespread and well-covered so no need for me to rehash the detail. I do feel extremely sorry for those who have an afiiation with that club. People want to believe in the organisation they work for, the team they support and the people they follow.

In taking this decision the leaders (owners) have caused untold damage in ways which are hard to repair. Trust, integrity, shared values, connection and community are not easily built but are quickly lost. Such a waste.

I know that other football clubs have done the same by the waym though I think that Liverpool has grated more due to its famously integral place at the heart of that community, a fondness founded in togetherness, belonging and shared values.

The second situation was that of the Scottish Chief Medical Officer, Catherine Calderwood, who was forced to resign after flouting the non-essential travel rules that she herself was the media face of. She was clearly doing an important and seemingly  good job and it’s such a waste of ability, as well as the time and effort of those left picking up the pieces to deal with the fall-out and organise a replacement.

I make no harsh judgement of Calderwood for who hasn’t at times facesd their own hypocrisy? This is such a stark reminder though of the imperative for leadership integrity when there is so much more at stake than just that invididual’s reputation.

Neither of these scenarious have anything to do with competence in the job. It’s all about character. Personal Leadership. The most important aspect of all leadership.

Where leaders fail the character test, there’s just so much waste. Invest in your own personal leadership. Invest in others anywhere you have influence.

So what about leadership? – new episode

I haven’t got to write today but I have been speaking with my college Roisin from LMI Ireland and we recorded a new episode of the podcast. Great talking with her about all the inspiring leadership stories that are emerging in difficult times. Hope you enjoy it.

In clearing things out yesterday, as many people are doing these days, I came across this plaque that my dad received in 1986. He worked for the Digital Equipment Corporation (DEC) for all of my childhood, I think about 25 years in all, starting his own businesses just a couple of years before he died in 1991. 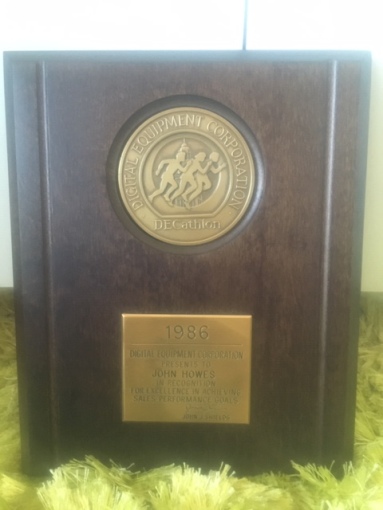 In our home I remember we had DEC towels, DEC pens, DEC bags and we went on DEC holidays! Occassionally we still come across some old DEC merchandise in an old cupboard!

As I mentioned in my post yesterday, my goal is simply to write each day, not knowing exactly where it will go but practicing the discipline and building routine. I see this post going down two distinct paths.

Firstly, the personal one. We lost my dad when I was 16, he was 49. Not ill, just gone suddenly due to undetected heart disease. There are many times over the years when I would have especially loved to be able to chat to him, this being one of them. My response it to be grateful. My family are well. We are restricted in what we can do but the five of us are well and in the same house. We can talk. Let’s make sure we do that. Live deeply. Connect. Don’t just exist in the same space and look back one day wishing we had lived deeper. The very precious gift of time and proximity is not to be unappreciated.

The second is the Leadership pathway. DEC is a tragic story in many ways, from the world’s second largest computer company when I was a kid, to rapid decline and extinction in a very short space of time. There’s a good review of the story here.

Simon Sinek also talks about the DEC decline in one of his books. I can’t remember it was Start With Why or The Infinite Game (both are excellent reads by the way). Fundamentally, it seems, that DEC leadership failed to adapt to a changing world with a clear vision of their part in the future. I would love for that company to still be around and to feel proud to own DEC stuff – a tangible connection to our family history. They had the opportunity and resource to be a key player in the new and emerging digital world, but they failed. It reminds me also of the Wright Brothers story compared to their well-funded rivals at the time to launch the first successful manned flight. Passion, purpose and commitment trumped ‘corporate wealth.’ In my business now, as with every other, as leaders we need to lead well. Be clear. Inspire. Take brave decisions. Communicate clearer than ever. Be human. Empathise. Set direction. Exude passion and purpose.

That’s all for today. More tomorrow. Have a great day.

Yesterday Roisin and I recorded episode 3 of ‘So What About Leadership?’. In this edition we talk about goals and goal setting.

I used to not like goal setting at all. It felt forced and restrictive when I prefer to be relaxed and spontaneous. Turns out I was just not using goals very well! Goal setting is simply the practice of deciding what’s important to you (in all areas of life) and setting a course in that direction. I love it! Hope you enjoy our conversation.;